In celebration of Harold's 47th Birthday (April 2, 1974), we're proud to release a limited-edition collector's deck with all proceeds benefiting the Harold Hunter Foundation.

Featuring a hand-cut collage design by Seth Neary of Driven Studio, only 47 decks are available and each comes with an 8"x12" print of the classic 1995 Harold photo featured on the board graphic. Each "Bleecker Banks" print is signed by photographer Gunars Elmuts. This exclusive deck ($75) is 8.125" wide and manufactured by Chapman Skateboards.

*Note: Decks are available for US shipping with a limit of 1 deck (w/ photo) per order. For international orders, please contact HHF to discuss shipping options and additional fees. 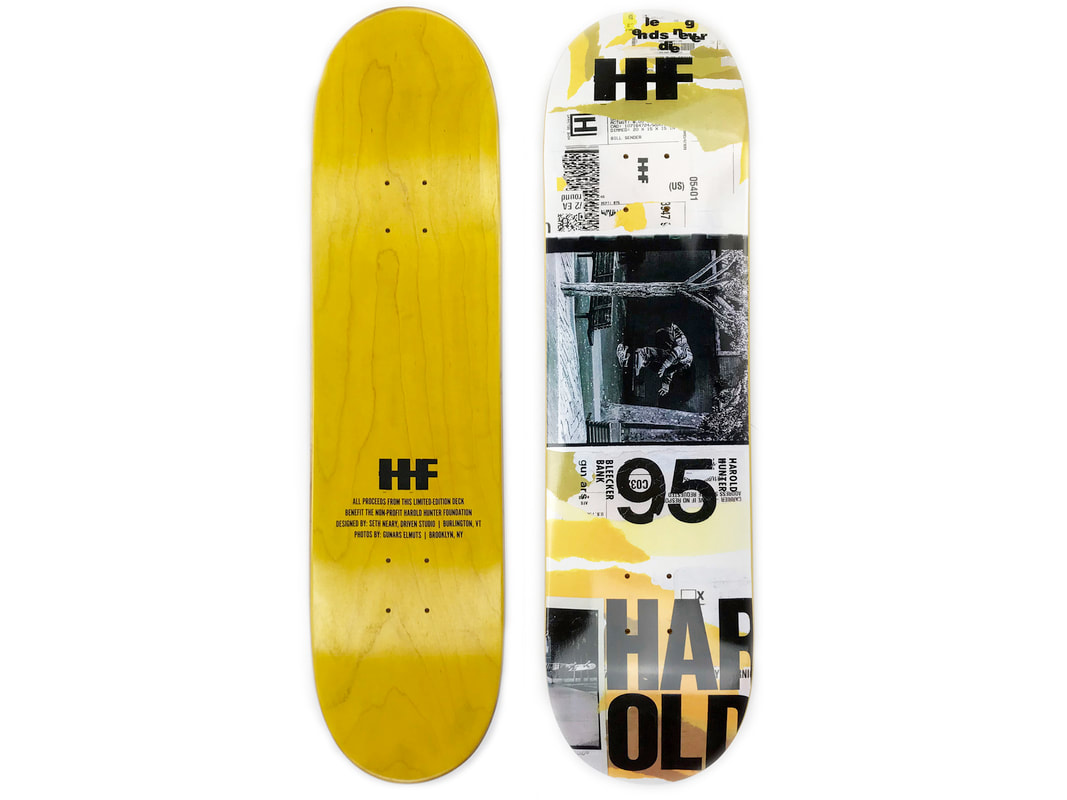 SETH NEARY PROJECT STATEMENT:
I love New York City! Growing up on a dirt road in Vermont and fantasizing about break dancing, hip hop, and skateboarding, NYC was very influential in my young life. Thankfully by the grace of skateboarding, I would make my way to NYC for occasional skate trips and, in the '90s, if you were skating in NYC you were bound to see Harold. I first met Harold through my good friend Gunars Elmuts. PSNY sponsored us both for a short time. Harold was mad cool, funny, and inclusive. He made me feel welcome in NYC in his way. We skated, hit Spoon, laughed, stayed out late, and peaced out. I'd see Harold on almost every trip to NYC in the '90s.

When the HHF crew asked me to create a board graphic for Harold’s birthday, I was not only humbled but honored—and nervous as hell. Harold is NEW YORK! Harold is dearly missed, and Harold is a legend! I contacted Gunars and asked him if I could use some of his images of Harold, and he graciously said, "Of course." Gunars sent me a folder of photos and, after combing through, I recognized a session at Bleecker Banks (Bird Shit Banks). The sequence was something all skaters can relate to—the warm-up ollie, couple throwaways, the aggression and frustration, the make, and finally the smile and high-five. Gunars captured it all. It was intimate; it was a rad one-on-one session, and it’s a time capsule. I chose the "make" photo and one "frustration" photo and collaged the rest. I reached out to Andre Razo, my consigliere, for consultation and got the nod. The process was organic and heartfelt. I love skateboarding, NYC, and Harold. Legends Never Die.
GUNARS ELMUTS PROJECT STATEMENT:
I'm always excited to help HHF. What they do for under-served kids in NYC is incredible. I know Harold would be proud! He was always so encouraging and generous with everyone who wanted to skate. HHF is completely in line with who Harold was as a person.

The day we shot these photos was super fun. Harold came by PSNY on 6th Avenue (where I sponsored him before Supreme took over) and we went down to Bleecker Street (a block away) and shot what you see here. It was just me and him. Harold always wanted to shoot photos. I remember we were trying to shoot a sequence of a trick and he kept bailing. I shot about four rolls of film without a make so I just tossed the film down the street—which I now regret—since I didn't want to spend the time or money to develop film with no makes! So, we went back to just shooting stills of the straight heelflip.

This photo ended up in TW Skate—Harold and I were pretty stoked about that. Over the years a lot of people told me they had this picture on their wall from the mag, so having it on a deck now seems like a great place for it to live on. I hope the board gets skated and destroyed as Harold would've done—that's why we decided to include a signed photo with each order. It'll be cool to see before and after pics of the deck once it's been thrashed! 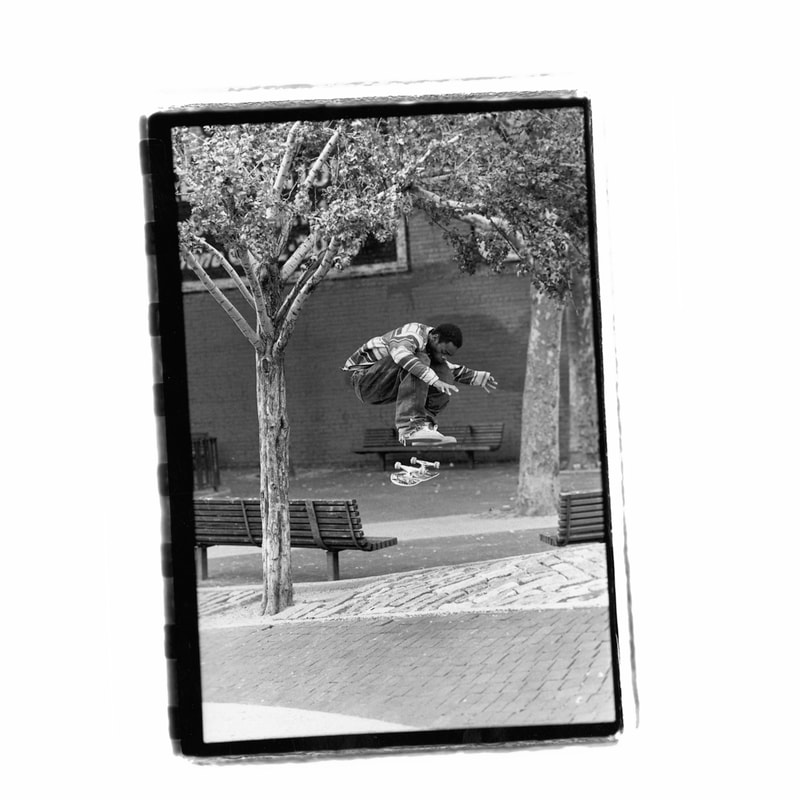